The bass fishing world is blessed with classic baits from well-known manufacturers like Heddon, Creek Chub and Fred Arbogast. What bassman worth his salt hasn’t used or heard of a Zara Spook, Injured Minnow or Jitterbug? There are, however, numerous regional baits that, in their time, made a big splash and were often quite innovative and ultimately, imitated. One such lure is the Martin’s Lizzard.  In, You Don’t Know Jack-The Martin’s Lizzard, we’ll examine the storied history of one such bait.

In 1946, Jack Martin of Drumwright, Oklahoma created his signature lure, the Martin’s Lizzard.  The lures were made of cedar and hand turned on a wood lathe.  Like most wood lures of this era, the bait also had two glass eyes. The lures were hand painted with an airbrush and housed in a two-piece cardboard box with a black and white paper catalog that detailed how to fish the lure. The catalog also listed all the colors that were available. Forty-eight different color combinations were offered, and custom painting was available upon request. Baits were made in only one size, 5/8 ounce and 4.5” total length. See the intro photo for an example.

This was a floating/diving lure not unlike the nearby Gainesville, Texas manufactured Bomber plug that was also catching on during this same period. What made the Martin’s Lizzard unique was the elongated body with distinct head shape, cinched body and longer, slender “tail” section meant to imitate a salamander or lizard. Unlike the Bomber, there was also a small tail spinner attached to the end of the lure. There was also no “luxon” type line tie on the Lizzard, just a tiny half moon eye welded into the lip. Instructions on the paper catalog included with each lure adamantly stated the following:

“CAUTION”-Do not tie line tight to eye in bill as it will kill the action, tie loose loop or use a small snap.

There were some other small manufacturers attempting to replicate and produce a salamander or lizard type lure when Mr. Martin first started his production. One such lure, the Hatcher Lizard, based out of Texas, had a patent design approved in 1944. The lure was jointed with a long thin tail section and a short, angled metal diving lip. It never achieved mass production and was quite different from Jack Martin’s design. Once the Martin’s Lizzard began to catch on, the paper catalog included with each lure also stated:

BEWARE OF CHEAP IMITATIONS-see your local dealer or order direct.

During the early years of production, one of the favored ways to fish the Lizzard, like many lures of this style, was to troll. This was the most efficient way to get these lures to their maximum diving depths and cover water. In Don Fuelsch’s 1961 Southern Angler’s Guide, noted Ozark author, Sam Welch, described this fishing method for catching big bass on Bull Shoals lake:

“In the summertime these prized fish often cruise around in the comfortable coolness of the big waters at depth ranges of 20 to 40 feet, and become accessible to anglers trolling deep-bill plugs. Some of the best catches of the year are made in warm weather, often between the hours of 11 a.m. and 3 p.m. Some of the most successful trollers let out lots of line….as much as 500 or 600 feet of it… to which of course, is attached a deep running plug. This gets the bait down to the 30 to 40 foot level when trolled at a speed of roughly 3 m.p.h.  Some whopping big lunkers have been caught by this method of fishing.”

Speaking of whopping big lunkers, one of the best advertisements for the success of Jack’s lure was the statement this same Sam Welch provided on the bottom of the early era box catalogs that indicated the staggering number of bass larger than 4 lbs. that had been caught on Martin’s Lizzards at Norfork Lake in the three-year period 1953-1955.  Norfork was the first of the Ozark region impoundments to be filled and the phenomenal fishing it enjoyed in its early days carried over when neighboring Bull Shoals Lake was impounded in 1951 and later, Table Rock Lake in 1958.  The Martin’s Lizzard was there to help all three establish the reputation they gained as incredible lunker bass producing reservoirs.

Martin’s Lizzard production continued in wood and in Drumwright until 1955 when the operation was moved to Stillwater, Oklahoma. Wood production and the accompanying cardboard box were phased out in Stillwater. The cardboard box was replaced by a two-piece plastic box and the first new iteration of baits from Stillwater were plastic with glass eyes. One would presume that the glass eyes were left over from the original wooden production. These plastic bodied, glass eyed baits are some of the scarcest Lizzards to find today. Full on plastic production with molded pressed eyes continued until 1970 and Jack’s death. His son Jack Jr. moved the business to Wichita, Kansas and continued production for another three years before selling to Jerry Kincaid of Indianapolis, Indiana in 1973. Production continued in Indianapolis for an undetermined amount of time. Baits were still in a two-piece plastic box, but the insert paper catalog eventually became yellow and black, and the line eye tie had become significantly larger. The tail spinner hardware also changed and now contained a small snap.

The relative early success of the Martin’s Lizzard spawned many imitators, the two most successful and popular being the Bomber Waterdog and the Whopper Stopper Hellbender. The Waterdog was introduced around 1955 and the Hellbender sometime in the early to mid-50s.

The Waterdog was produced in wood and in three sizes, until production switched over to plastic in the early 1970s and was soon after phased out of the Bomber lineup.  The Hellbender originally came in three sizes as well; until the magnum Hellbender made it four sizes later in it’s production run. Always produced as a plastic bait, extremely early versions can be found in two-piece cardboard boxes calling it the Texhoma Lizard.

Both baits, though introduced a full decade after the Martin’s Lizzard, bear a strong resemblance to Jack’s creation. Both had tail spinners and two treble hooks. The body of the Hellbender had the two-piece, cinched body look of the Lizzard, while the Waterdog sported a three-piece segmented body. Unlike the Lizzard, both imitators had a “luxon” type line tie. Bomber’s Waterdog was fashioned with an oval style lip, while Whopper Stopper’s Hellbender sported a unique heart shape design. Both designs deviated slightly from the shovel style lip of the Martin Lizzard. All three lures are now sadly relegated to the annals of bass fishing history but remain some of the most productive and memorable early deep diving “crankbaits” ever devised. Jack Martin’s original design proved successful and created a legion of followers in the Ozark region that swore by its effectiveness. The lure’s penchant for catching large bass during its heyday was well documented. A small cadre of lure collectors still seek out pristine examples of one inventive and creative Oklahoman’s enduring legacy.  Now you know Jack, and you know why.

To read the entire article written by Sam Welch in the 1961 Southern Angler’s Guide, check out the gallery below. 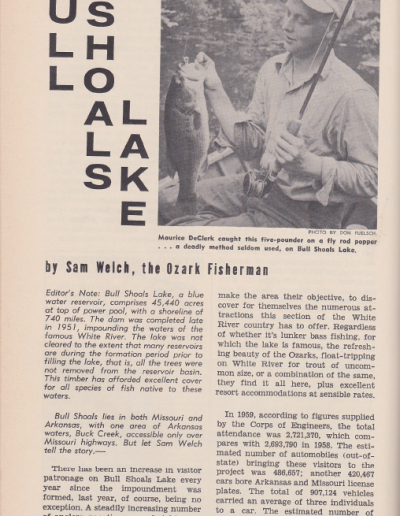 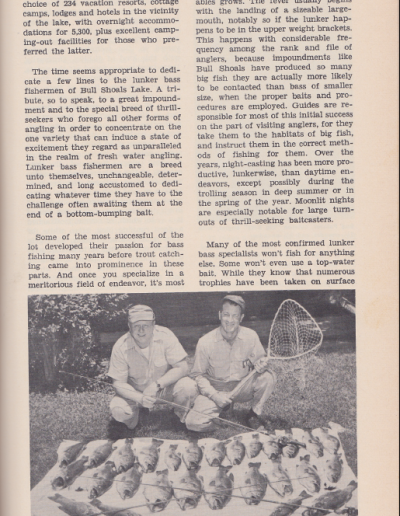 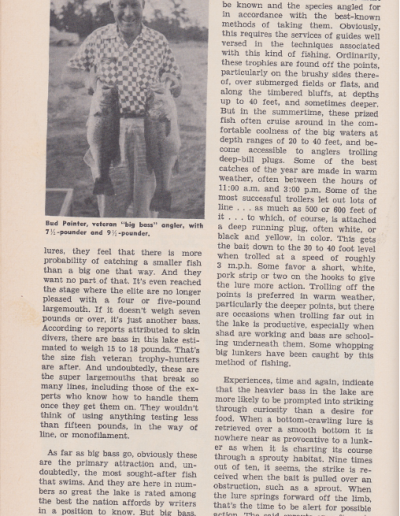 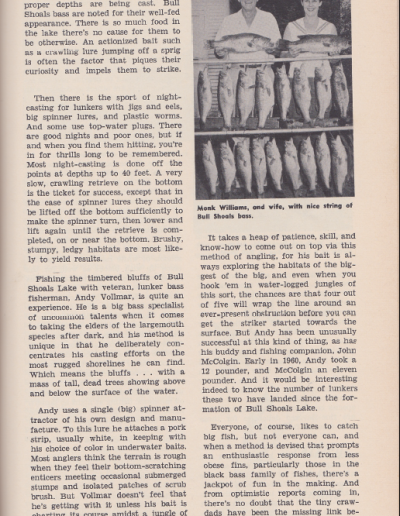 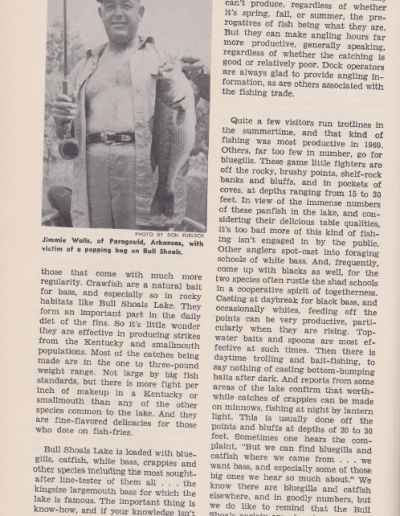 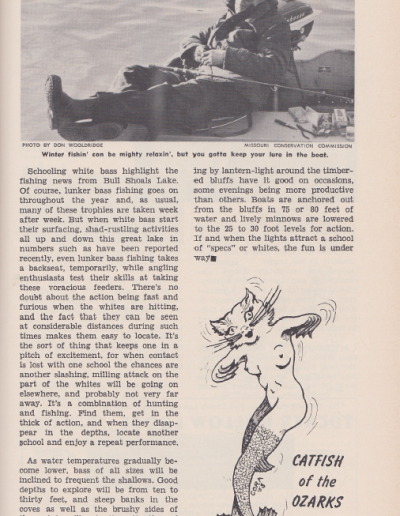 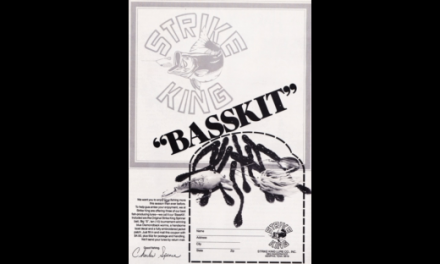 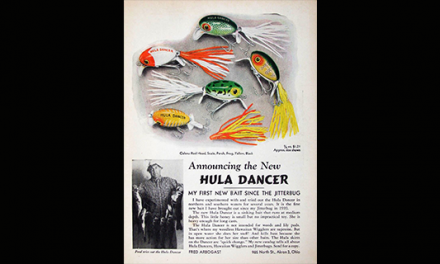 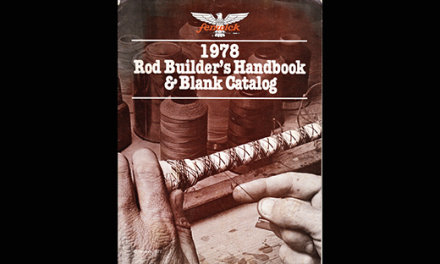