I will readily admit, I am a Dee Thomas groupie. I give all the credit to him for the flipping technique and concept, amidst the hate mails I get from others who say he didn’t invent it. I’ve taken a lot of time on this site to write pieces pertaining to the subject because I feel the whole story, although it’s been written and told over the years, hasn’t been told in a long time and needs to be consolidated in one place – preferably here at the Bass Fishing Archives.

What I’ve always been missing, though, was the original quad-fold pamphlet published by Fenwick in 1976 called The Whole Flippin’ Story.

The Whole Flippin’ Story was written to teach anglers interesting in learning to flip, how to do it. Printed on  17” x 22” piece of brown and white paper were renderings and words describing the basics of the technique and concepts of the method. Although the renderings of the presentation led a lot to be desired, it provided a platform for someone to at least gain the basic knowledge.

Since starting this site nearly 10 years ago, I have been looking for a copy of the original pamphlet high and low. I’ve scoured the auctions and asked all of my close friends who were around at the time and had some connection with Thomas if they had a copy. I’ve even asked Thomas himself – no luck. It’s one of those pieces of bass fishing history that, in my eye, is priceless (there, I just priced myself out of the market).

A while ago as I was reading through a bunch of old American Bass Fisherman magazines and I happened across a familiar piece. It wasn’t the original brown and white pamphlet, but from what I could tell, it was darn near the original. The same renderings, the same words. It was somewhat in my hands all along.

This weekend I was going through some recently-acquired magazines I needed to unbox and find a home for. In that box was an original copy of Bassmaster, Volume 1, Issue 1. Not a re-pop like the one I have that Ray Scott gave me years ago, but the real McCoy. There were also another 100-or-so old Bassmasters, a number of copies of BassFan Mag, and a bunch of other things. It was one of those other things that got my attention. Specifically, a Bass Institute Study Manual, of which I already had three. This one, though, had a bunch of papers stuffed in it. I opened it up and couldn’t believe my eyes.

Staring at me was an original 1976-era The Whole Flippin’ Story. I dropped everything else, sat back in my chair and read every word in it. The I compared it to the version printed in the American Bass Fisherman (ABF) magazine I had. The ABF rendition was nearly complete but they didn’t print a few things, such as the picture of the rod and why Fenwick designed a completely new rod for the technique.

Today no one, except for maybe Gary Klein, actually flips in the true sense of the word. They pitch. And when they pitch, they’re fishing further away from the target than one would when actually flipping. But because flipping was akin to close-quarters-combat, a standard rod design wouldn’t work. Hence the redesign of the rod.

In casting or pitching, a rod has to have a flexible tip in order to load properly to create the energy needed to make the cast accurate. Then, when the angler gets bit, the hook isn’t actually set until the tip bends into the meat of the rod where the power is.

On the other hand, with a true flippin’ stik, the fact that you have maybe 15 feet of line out max, you need to instantly set the hook and get the fish moving out of the cover in order to have a shot at boating it. So, Dave Myers at Fenwick designed a rod that would do this and yet have some give in the event the fish gave the angler some trouble.

The rod is designed so the tip doesn’t bend much at all. In essence, it’s a pool cue. This trait hooks the fish on the initial swing and gets it moving out of the cover and towards the boat. Then, in order to be able to pull on the fish without the worry of the hook pulling, Myers designed the mid-section of the rod to the butt to have a lot of bend. This design is completely opposite of the way a standard rod is designed. If you look at a cross-section of the blank wall from the butt to the tip, you’ll actually see the tip is thicker in wall thickness than the mid-section of the blank. Now I’ve never done this to my original Flippin’ Stiks but I did see the sales example back in the 70s that Fenwick would bring around to the shops to show the people selling the rods.

Another cool thing that you’ll see in the pamphlet is that the original Flippin’ Stiks were one-piece rods, not the telescoping rods that most true flippers are accustomed to seeing. This goes back to the time when a big bass boat was 17-feet in length and most were in the 15- to 16-foot range. The original one-piece rod wouldn’t fit in the rod locker and guys didn’t want to buy a rod that couldn’t be stowed. So this time, Myers took an idea from Japan, who had recently started shipping telescoping rods to the US and designed the Flippin’ Stik so the rod would telescope into the handle section. This reduced the size of the rod to below 6 feet and allowed it to be stored in the rod lockers of the day.

So, without further ado, I present to you, Fenwick’s The Whole Flippin’ Story in all its original glory. 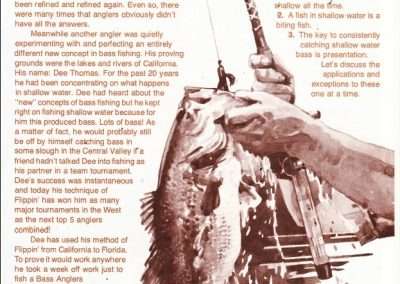 First Bi-Fold opening of The Whole Flippin’ Story by Fenwick. 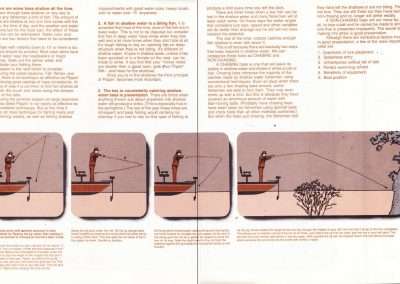 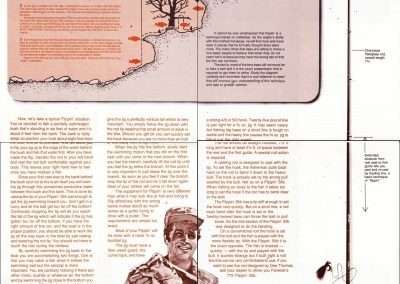 The fully Opened 17-inch by 22-inch pamphlet, The Whole Flippin’ Story. Sorry for the seams, this was a bugger to stitch. Photo Terry Battisti. 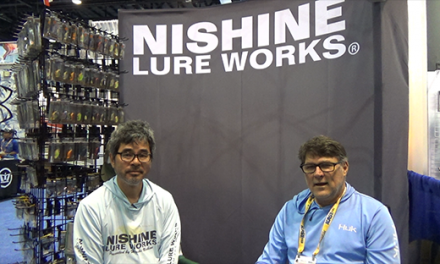 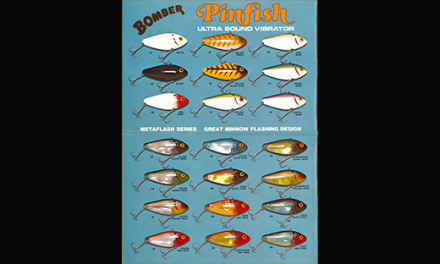 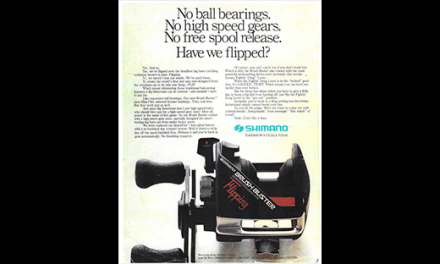