For those of you who fished in the 1970s and 80s, the name Rogers should bring back some memories as a recognized name in lures as well as a top tournament angler. For those of you who didn’t fish during this time, you’re about to see a bit of lure and angler history. What we have here today is a Rogers Lures catalog from what I expect was 1974. I say that because in this catalog, Jim Rogers is introducing a crankbait, the Big Jim, his answer to the Big O craze.

The front cover is pretty nice compared to the cover of the Bill Norman Lures catalog we presented on Monday. It shows a picture of Jim kneeling in his boat with a toad largemouth. By the looks of the timber, I would bet this picture was taken at the lake close to where he lived in Lamar, MO, Stockton Lake.

Also on the front cover, is a little blurb about Jim, his wife Babe and their fishing accomplishments. Jim and Babe were stars on the Missouri fishing scene, having won several state championships as individuals and husband and wife team. In 1963 and 1966 they won the World Series of Sport Fishing husband and wife category to add to their list of accomplishments.

Again, what I’ll do here is talk about some of the more known baits and then present the entire catalog at the bottom of this piece in a gallery.

Let’s get on with some of the more well-known baits.

Flipping the cover and you see two pages of Rogers Spinner Baits. The first page has baits such as the Ambusher single spin, Buzzin’ Ambusher double spin, the Bass Rat and Twin Spin. The skirts are all vinyl and there are four different blade options. There’s nothing that states the weight of the baits. On one of the double spins and the Twin Spin, you’ll notice a fiber weedguard on the head. This was maybe a copy of the Bass Buster design, which had a guard of the same type. It wouldn’t be long after this that weedguards on spinnerbait would all be eliminated due to the fact the design of a spinnerbait makes it near weedless without the guard.

On the next page are an assortment of Spider Spinner Baits (remember Bill Norman’s bait a couple days ago?) that again are spitting images of the Bass Buster Tarantula. Next to the Spiders are several knockoffs of Bass Buster’s Beetle and Beetle Spin, called the Bee.

A little known fact regarding the Beetle and Beetle spin is that they weren’t invented by Virgil Ward. The bait was actually invented by a Kansas City man named Chuck Woods. Woods sold the rights of the Beetle to Virgil Ward in the 60s. As with any tackle company in the day, Jim Rogers was quick to react to the Fred Young Big-O craze. Like Norman, Cordell, Bagley’s and Storm, Rogers quickly jumped on the Alphabet Lure bandwagon in 1974. His contribution was known as the Big Jim. There isn’t much in the catalog that describes the Big Jim. No weight or length, only that it came in 16 colors and had a built in rattle.

The Craw Pap is another familiar bait shape – obviously taken from the Bomber. It’s described as a high-floating diver, with an internal rattle as well as being a suspending bait. That makes two lure companies in 1974 advertising a suspending lure. The Craw Pap came in two sizes, the original Craw Pap and the Super Craw Pap, although no weights or lengths are given. Here’s an interesting look at an early buzz bait. Rick Clunn made the Harkin’s Lunker Lure a household name in 1976 by nearly winning the Bassmaster Tennessee Invitational on Cordell Hull. But the Lunker Lure had been out since the early 70s. Rogers Hummin’ Rat resembles the Lunker Lure in that it is not an inline buzzer like the Humbug next to it.

Rogers also offered rods, customer pistol grip handles and power handles for reels. There’s no information on the rods, so it’s difficult to tell if he only offered two different rods or a whole line of them. It being in the 1974 timeframe and the fact the blanks are yellow points to the rods being made from glass, possibly Fenwick.

Down from the rods are two custom pistol grips, one fashioned out of wood and the other being rubber. If you spend any time on social media, you’ll see a resurgence of custom pistol grips, mainly coming from makers in Japan. The wood grip here would be a nice inspiration for anyone wanting to design a new vintage grip. The back cover of the catalog featured Rogers’ topwater lures. He offered three different models each in two different sizes. If you take a serious look at the baits, they’re all made off the same blanks. What differentiates them are the number of props. The Hawg Hunter and Hawg Hunter Jr were dual prop baits that came in 1/2- and 3/8-ounce sizes. The Hawg Hustler and Hawg Hustler Jr had a single rear prop and the Hawg Stick and Hawg Stick Jr. had no props.

The topwater baits were made of clear plastic and came in 14 colors.

There is a lot more that Rogers had to offer in this catalog, but I’ll let you look for yourselves below in the gallery. I’m sorry for the fine print. The font size in the catalog is small and difficult to read even using a magnifying glass.

Again, I hope you enjoyed this look back into early 70s tackle history. If you have or know of anyone who has old tackle catalogs and would like to share them with us here, please hit us up in the comments or send us an email. 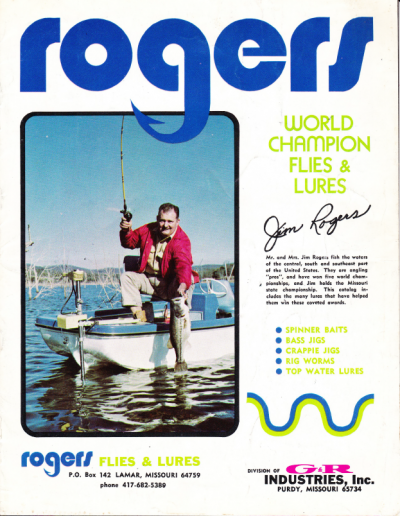 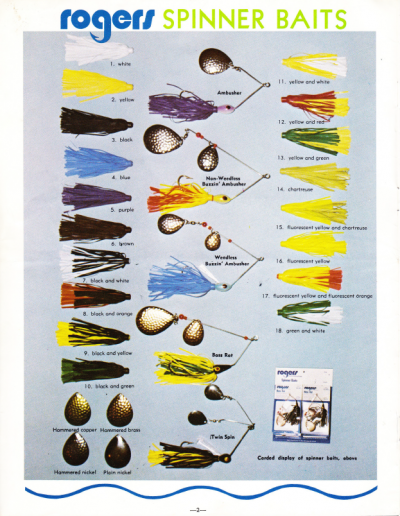 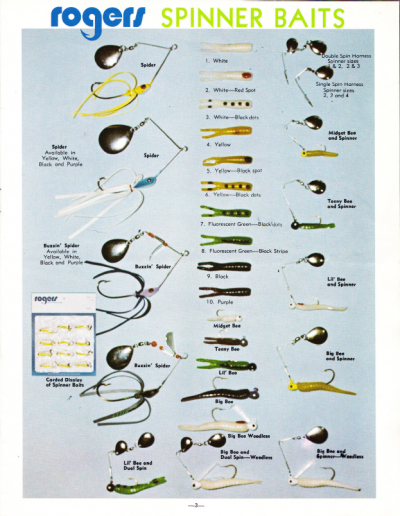 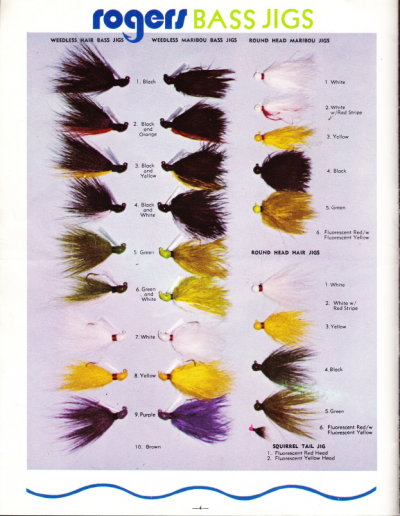 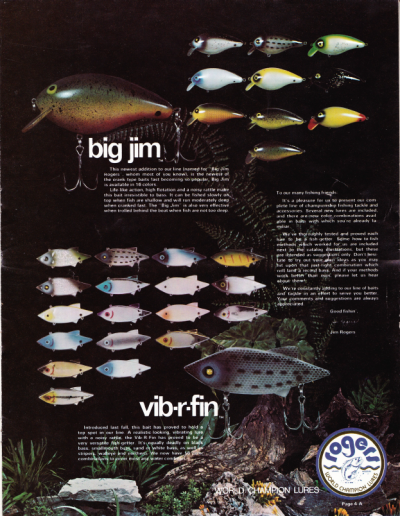 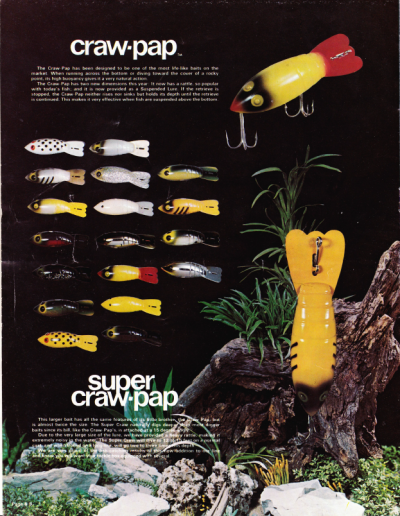 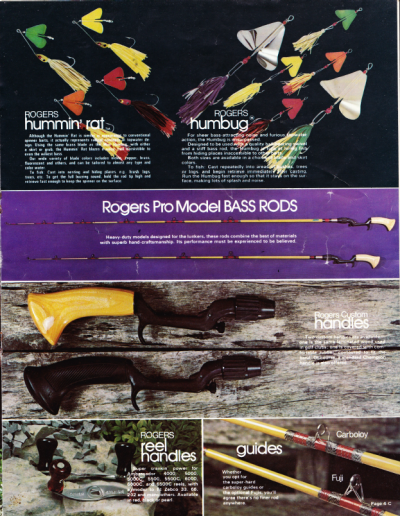 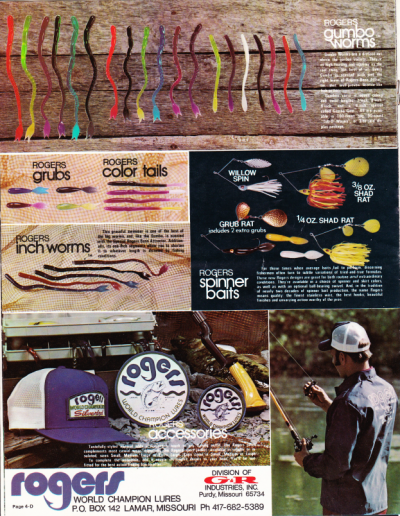 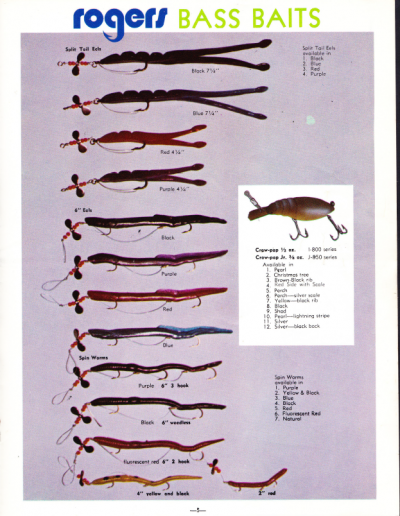 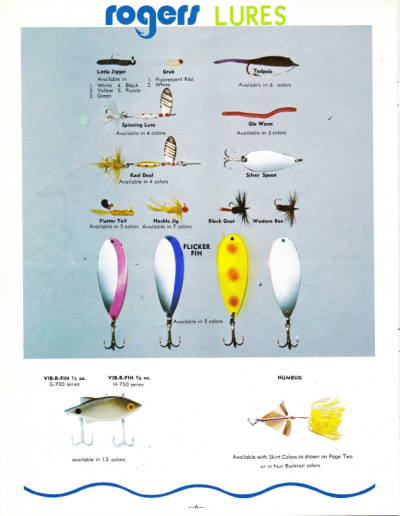 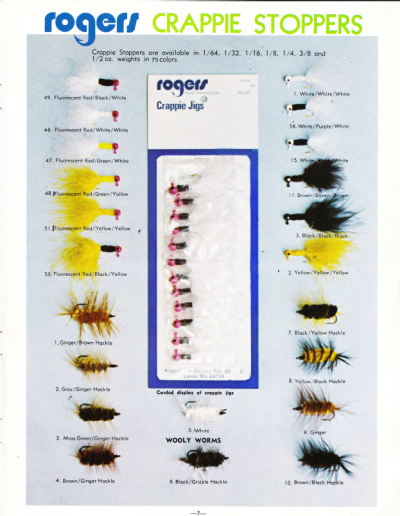 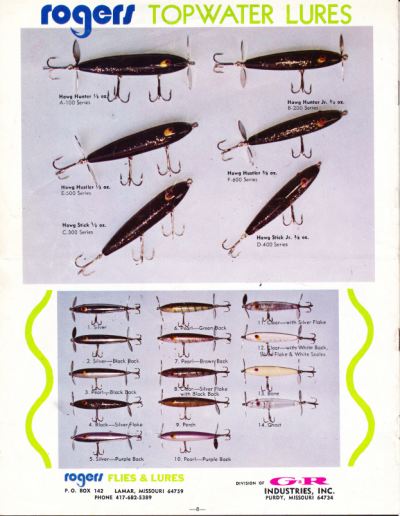 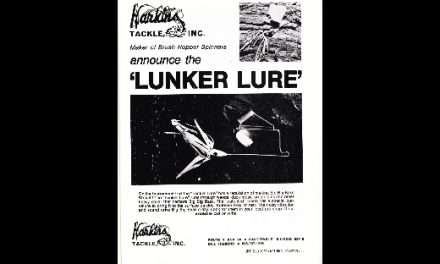 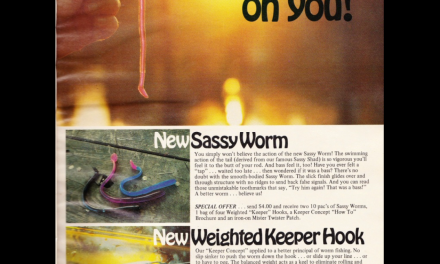 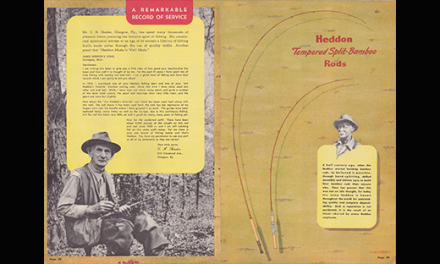 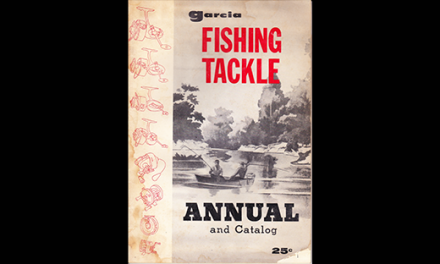