Quest for the World Record Tiny 183-acre Lake Miramar yielded the then-California record. Weighing in at 20-15, the fish dwarfed the existing record of 17-14 caught by James Bates of out of Lake Murray one year earlier.

In 1959, the California Department of Fish and Game joined forces with the Florida Fish and Wildlife to transport and release 20,000 Florida bass fingerlings into San Diego’s Upper Otay reservoir. Upper Otay would act as the brood pond for the Floridas which would then be transplanted into area lakes. The Floridas were chosen because they exhibited a growth rate almost twice as fast as their northern brethren and City Parks officials wanted a fish that would offer a sustainable population for its patrons.

Little did they know what would happen in the near future.

The 1971 record fish, caught by Randall Danio, has some interesting information regarding the catch. He was reportedly fishing for trout at Lake Miramar with a spinner when the big fish ate.

Then, in July of 1972, James Bates caught the next state record, as mentioned above. This fish was the first of the last three state records actually caught by a bass fisherman – the others being caught by trout anglers. He caught his fish on a Grape Mann’s Jelly worm.

California State biologist Larry Bottroff, who was instrumental in the planting of the Florida bass in California’s waters, shed some light on the explosion of trophy largemouth in the state in the Sept/Oct 1972 issue of Bass Master Magazine. Here is an excerpt from that interview with writer Chuck Garrison.

“I believe there are bass of 18 and 19 pounds in some of these waters now! I also believe bass of this size will be taken by 1975. Possibly sooner. The largest I have observed weighed 17-03 and was only 10 years old. The condition of some 12-year-old Floridas I have observed is good. It appears as though they will live four or five more years. If they do and remain in good condition, 20 pound plus bass might become a reality! Time will tell.”

Dave Zimmerlee had never fished Miramar before that fateful day. He had just relocated to San Diego from Missouri after being in school and the military for eight years. While in Missouri, he had become a bass angler having taken a 12-04 out of Bull Shoals reservoir. Little did he know his next trophy would cause such a stir.

Zimmerlee reported that he hadn’t had any luck fishing the shore in the morning and around noon decided to go rent a boat from the concession. Here are his words from an interview that was printed in the Sept/Oct 1973 issue of Bass Master Magazine, as written by Chuck Garrison.

“… I went up and got a boat and went and fished about three different spots. I got a few little bass but threw them back. Then I started to move up to another spot with the boat and I saw this big fish swimming in the water.”

He dropped the anchor and threw a live nightcrawler at the fish – and it ate it.

The rest is history.

Larry Bottroff was again interviewed for an article published in the 1974 Bass Master Fishing Annual, this time by writer Myron R. Fischer, called Quest for a SUPER BASS. This time Bottroff was again asked why he thought the San Diego lakes produced such giant fish. In Fischer’s words, here was the answer:

“An interesting sidelight, is the fact that fertility of both [Lake] Miramar and [Lake] Murray is low. Bass have attained their size and condition, due to their feeding on trout.”

An interesting fact considering Bottroff, only a year earlier, stated in an interview with Garrison the main diet of the San Diego Floridas was threadfin shad.

Since this time California has produced nine documented largemouths over the 20-pound mark. One of those fish, nicknamed Dotty, was caught at least 5 times by anglers including Jed Dickerson and Mac Weakley – of which three of those catches the fish weighed over 20 pounds. The last time, of course, Dotty weighed an astonishing 25-01 but was released because she was unintentionally snagged.

Although biologists and anglers predicted the world record bass would come from some San Diego lake in the 70s, it didn’t happen. Throughout the 80s and 90s the prediction was still being made. Many anglers got close but it wasn’t until 2009 the record would again be challenged and this time broken.

The fish didn’t get caught in one of the “usual” lakes guessed by experts, either. The record was broken 77 years to the day later by Japanese big-fish hunter Manabu Kurita from Lake Biwa, Japan. So much for the odds. 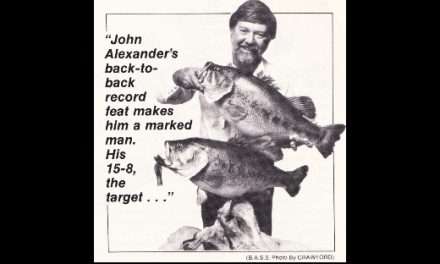 Texas Trophies, Then and Now