What happened to that once-mandatory piece of pigskin we used to adorn on a jig or a spinnerbait? Until just recently, it had been relegated to the dusty shelf of a seasoned bass angler’s garage, rust sealing to metal lid to the glass jar. Pork has had an up-and-down relationship with anglers for about 100 years. Today we’ll talk about its rise and fall in the eyes of anglers in Pork: The Forgotten Bait – Part One.

Poll 100 bass anglers between the ages of 15 and 30 about pork rind and I’ll bet you get a lot of strange looks. Ask them if they’ve ever used it bass fishing and I bet you’ll get a 100-percent response of “no.” Then take a poll of anglers from 40 to 60 and ask the same question. I would be willing to bet a 100 Jackhammers they’d predominantly say “yes.” Then ask them when the last time they actually used it was. I’d bet few have even had it in their boat for 20 years or more.

It’s easy to understand; pork is a pain in the rear to keep wet and even more of a pain to get it off a hook if dried out. It tends to rust hooks if they’re not cleaned well after use and the salt brine solution they’re stored in doesn’t mix well with the carpet of a bass boat. Plastic is so much easier to deal with on so many counts.

Essentially, pork rind as a trailer or stand-alone bait is as dead as the animal it was rendered from. But it may be making a third trip off the bench in the near future. From the early 1900s through the ‘60s you weren’t even considered a decent bass angler if you didn’t have a few jars of pork rind in your tackle box. Names like Lutz, Pedigo, Al Foss, Louis Johnson and Uncle Josh were all part of the fishing vernacular of the 20th Century. Nearly every article written about bass fishing at least mentioned the use of pork rind. Then in the early ‘70s, it went the way of the Dodo bird.

New plastics, alphabet lures, buzzbaits and spider jigs all played a part in sending the pig skin to the bench.

Then, around the 1980 timeframe a couple of Arkansans by the name of Huland Nations and Bob Carnes changed that. Actually, it was the 1977 Arkansas State Bass Tournament that got the ball rolling when Nations put a beating on 400 other entrants using what would eventually become the Jig-n-Pig. About that same time, Carnes was experimenting with living rubber (and inventing the Arkie Jig) and using pork as a trailer on his jigs. What followed was Uncle Josh, the only manufacturer of pork rind left, couldn’t keep up with demand from a four-state region of the Midwest. The pork boom was on – for a second time.

Then around the mid-90s, the bait pretty much took a backseat to other techniques and baits, primarily the tube thanks to Denny Brauer, Guido Hibdon and Tommy Biffle. Jars of pork sat in the garages of bass anglers, rusting and crusting as they will, until someone wins a big tournament on them again.

It’s funny how history repeats itself over the course of time. I say this with a lot of cynicism, as pork has finally, after 20 years, begun to make a comeback. It was too good a bait not to.

The first piece of early literature I’d like to share is from a 1923 Al Foss ad. It’s hard to miss the kid holding the giant bass caught from Florida’s Kissimmee River. According to the ad, the fish weighed in at 15 1/2 pounds and was caught on an Al Foss Shimmy Wiggler tipped with a piece of Al Foss pork rind. The claim from the customer goes on to say they also had a 12 3/4-pound bass amongst others.

To the right of the text, Al Foss has a display of Wigglers available at the time along with a bottle of pork rind (cost 45¢). Archaic by today’s standards in baits, the Wigglers emulate a contemporary in-line surface buzzer that would use pork as the body. I wonder how many years it’s been since a bass, any bass, has seen the likes of a bait such as these?

But we have something like this today. It’s the buzzbait with the toad attached instead of a skirt. This “recent” alteration of the popular propeller-driven surface lure may not be so recent after all. I’m biting my tongue right now. The second piece is from a South Bend Bait Company catalog circa 1937. In this catalog, South Bend offers up a number of options for the pork aficionado. What I found interesting about this page is South Bend’s attempt at making pork substitutes for those who don’t want to deal with the real thing. Think about it, they have a rubber pork substitute AND a dried substitute. Two offerings that became available during the second coming of pork in the 80s and 90s. I hate to say it again, nothing’s new in bass fishing. Looking at the real pork, South Bend offered five different styles/sizes from a fly rind, a couple of strips and a couple of frogs. Check out the prices at 25¢ a jar and between eight and 25 baits each. The colored Pork Frog Chunk cost a little more at 40¢ per jar and only six baits.

The synthetic imposters, on the other hand, cost a little more with the rubber rind being 30 to 35¢ per dozen while the dry rind cost 40¢ for six to a dozen strips. I guess they had to make their money somewhere.

The next pork rind throwback is from the 1950s, a booklet called Pork Chunk Fishing written by Royce R. Mallory and published by Netcraft, which is still in business today in Toledo, OH under the name Jann’s Netcraft. The booklet written by R. R. Mallory is a 44-page book written on the author’s exploits with the pork chunk. It’s filled with fish stories (which are pretty funny in themselves) but most importantly it goes into good detail on how to fish the pork chunk – a bait that was long forgotten before the second coming of pork. Published in 1950, Pork Chunk Fishing is a great historical look into using pork as a bait itself instead of as the pig in jig-n-pig. In another piece I am working on, I plan to write on this long-forgotten technique, so I won’t go into much more detail here.

In Part Two of this series, we’ll continue to share some other pieces that were written in the 50s and then jump to the 80s and ‘90s. In those ads, articles and manuals you’ll see the bait wasn’t just designed and used as a trailer for a jig or spoon. To start off, though, here’s a piece that was written and published in Don Fuelsch’s 1962 Southern Angler’s  and Hunter’s Guide complete with some pretty cool ads. 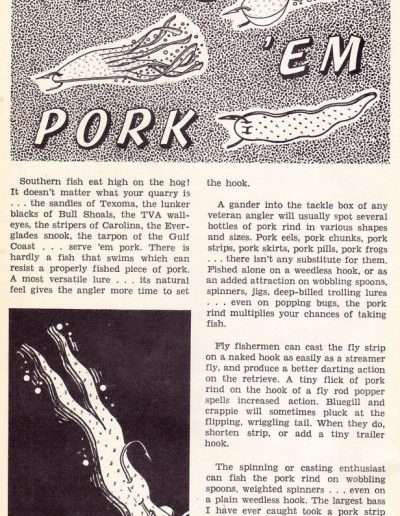 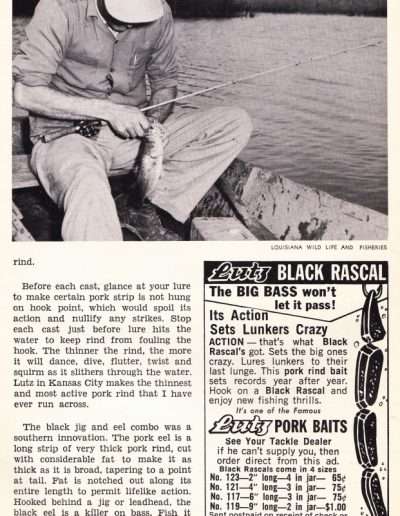 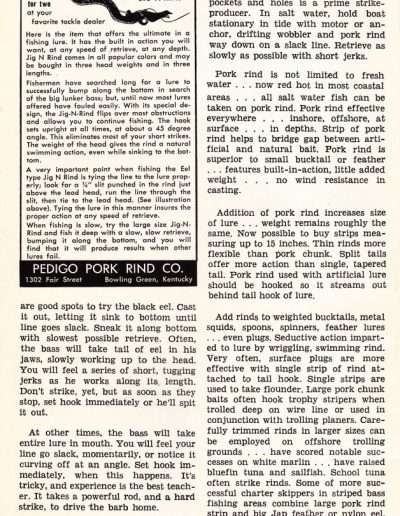 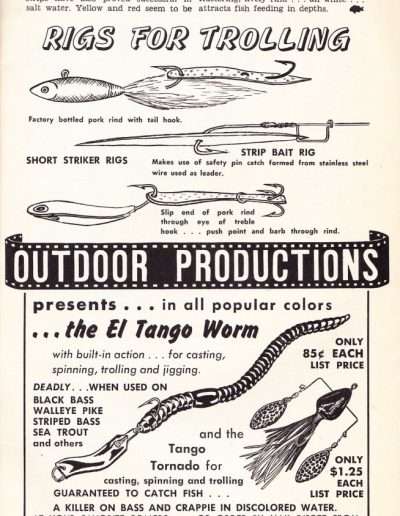 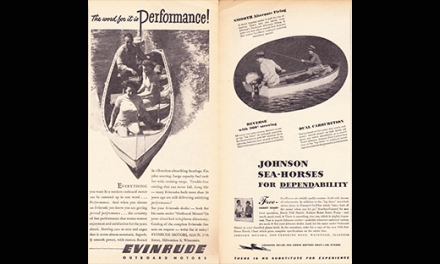 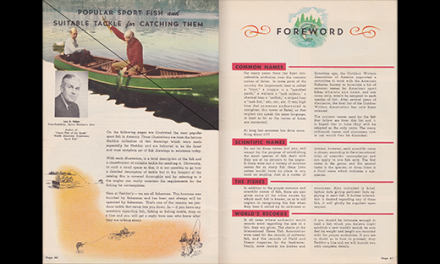 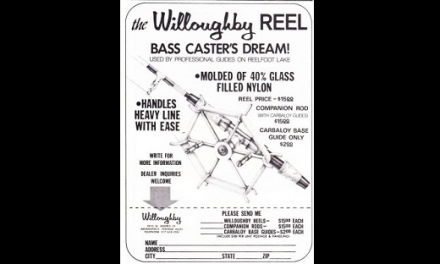 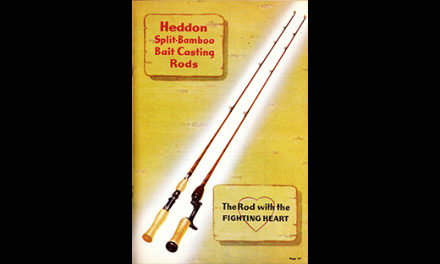