In Old Bass Boats – 1975 Part 1 and Part 2 we covered the bass boat manufacturers of 1975 and what they were offering angler. Today in Old Bass Boats – 1975 Part 3 we’re going to take a look at the leagues and what they were offering in the way of Championship boats that the consumer could buy. The Bassmaster Classic boat is a very well-known entity in the industry but not many know that both the Bass Caster’s Association and American Bass Fisherman also sold their Championship boats. We’ll give you a look at what they all had to offer in 1975.

The nice thing about these ads is they give you a good idea of how these boats were rigged in the day and what anglers fishing the Championships expected out of the boats. Most were rigged to the hilt with all the new gadgets, the biggest motors and the best electronics. Not only that, you get to see what these packages cost.

We’re not just going to cover the Championship boats, though. Going through the stack of 1975 magazines I have, I also found some boat dealership advertisements that were pretty interesting too.  These ads show what dealers were hawking in 1975 and what their prices were for rigged boats. It’s a neat look back at the market in 1975.

Let’s start off with the Bassmaster Classic boat for 1975. 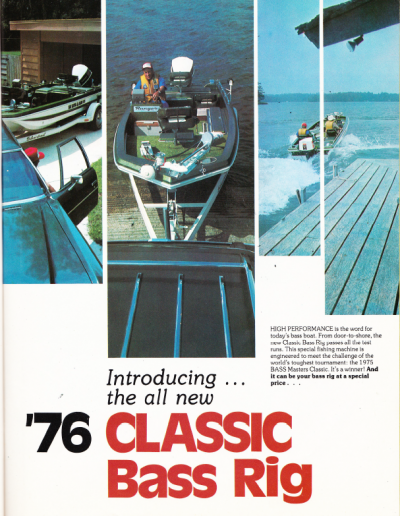 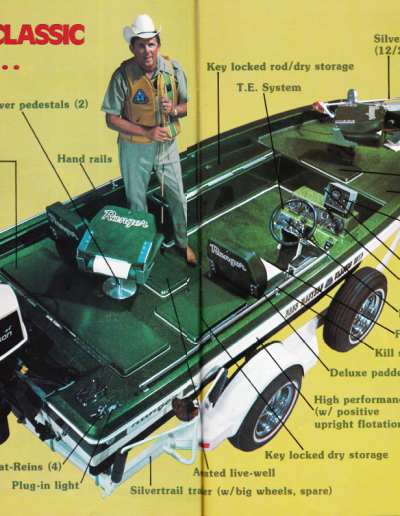 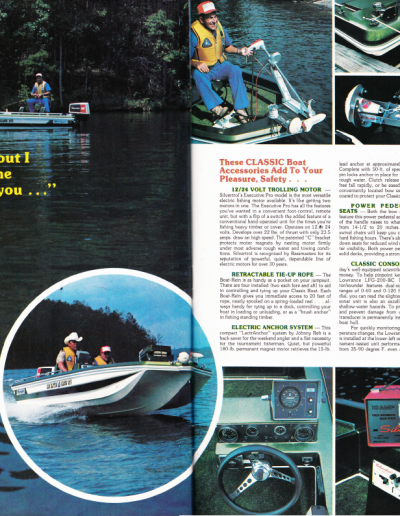 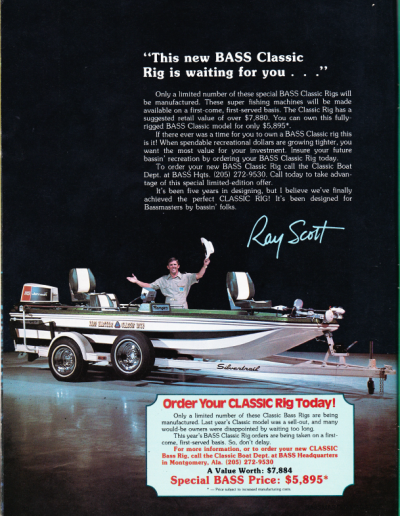 Then, in the September/October issue, I ran into a spread for the 1976 bass Master Classic boat, which confused the heck out of me until I read the first page of the 6-page ad. Unlike the 1974 Classic Boat ads, Ray was advertising the boats to be used in the 1975 Classic as the 1976 Classic Rig. I’m not sure if this was a typo or that the rigs were built on a 1976 platform. The later is probably the right answer as most boat companies, especially Ranger, were in the position to bring out their new model year boats mid-year.

The boat came rigged with a 1976 model Johnson 115-h.p. motor with power trim and tilt, kill switch, a 12/24-volt Silvertrol trolling motor with 23-pounds of thrust, and a Johnny Reb LectrAnchor system. The electronics were a Lowrance LFG-200-BC and a Lowrance Surface Fish-n-Temp gauge, both located on the console. The entire package came on a Silvertrail trailer. This was a few years before Ranger bought Silvertrail and started making their Rangertrail trailers.

The console of the boat featured a speedometer, tachometer, gas gauge, trim, toggle switches for aerator, bilge pumps, and lights. The whole boat was powered by three 96-amp Silvertrol batteries, a battery gauge, and plug-in charging with the Total Electric System switch.

The entire Bass Master Classic boat package cost $5,895* without shipping, destination, and taxes, assuming there were not increased manufacturing costs as qualified from the asterix. Not a bad deal for one of the top boats available at the time.

BCA Grand National Boat – The Bass Caster’s Association Grand National was their equivalent of the bass Master Classic and of course, they had to have a boat for that event. BCA chose to use Arrow Glass as their platform and for the 1975 Grand National, they were using a 1976 model Arrow Glass Nova LTD Mark I. This ad came out of a July/August 1975 Lunker Hole magazine.

The ad is nothing like you saw from Ray Scott’s Classic Boat ad above, but the ad did cover all the points needed. The rig came with a 115-h.p. Mercury and power trim, Son Dyke Custom Trailer with spare tire, Lazy Troll 12/24-volt trolling motor, Humminbird Super-60 Flasher, and three batteries.

The rest of the features were Mercury speedometer and tachometer, Fo-Mac surface temp, electric anchor, 18-gallon gas tank, and all the other options available on the LTD.

As with ray Scott and B.A.S.S., BCA was pre-selling their Grand National prior to the event and for $100 down, you could reserve your boat. The out-the-door price for the boat was $5,295, again not a bad price for a fully rigged boat at the time. ABF Grand Prix Boat – American Bass Fisherman’s Grand Prix Championship boat for 1975 was based off the 15-feet, 3-inch Stryker bass Boat made in Huntsville, AL. In the Stryker ad we complained a bit about the lack of a description of their boat. Those complaints were answered somewhat here in this two-page spread. This boat seems to have been outfitted better than the Classic and Grand National boats presented above, and the price was even less at $4,295. Of course, this was a 15-foot boat compared to the 17-foot boats offered by B.A.S.S. and BCA.

This ad, taken from the September/October 1975 issue, is cool in that you could choose the boat your favorite angler fished out of. American Bass Fisherman included a list of their Grand Prix anglers based on their Angler of the Year finish for 1975. Some recognizable names for those of you who follow the Bassmaster Trail would be Emmett Chiles, Shorty Evans, Wade Singleton, Jerry Rhyne, Hugh Massey and Glen (sic) Wells. I don’t believe B.A.S.S. ever made an offer like this. At least it wasn’t advertised.

By 1975 several major boat dealerships had determined it would be good to advertise their stock in the bass fishing magazines. Because of this, we’re including some of the boat dealerships in this part of the article to give you a good idea how much these boats cost back in 1975.

Bill’s Marine, St. Louis, MO – Bill’s Marine in St. Louis, MO must have been a pretty big name in the Midwest back in the day. They had multiple ads in each issue of The Lunker Hole magazine I went through and they also seemed to be the first to get new model year boats, before other dealers got them.

The next ad they placed started off by mentioning the BCA Milwood tournament and that three of their anglers had taken top spots. Rich Williams (5th place), Larry Landers (8th place) and Dallas Bacon (11th place). Boat Town USA, Plantation, FL – Boat Town USA was another of the advertising heavy hitters, at least in American Bass Fisherman magazine. Each issue had one full-page ad between the two shown here.

In the first ad, Boat Town reveals the bass boat manufacturers it stocks, that being Venture, MonArk and Stryker. They also advertise the trailers they stock, electronics, trolling motors, and that they do high-performance custom props. The second ad, they’re pimping Venture Boats, Mercury Motors and H&P Custom Trailers.

The ads were bold and colorful and if I was in the Florida area, I’d have found a way to get to the shop. 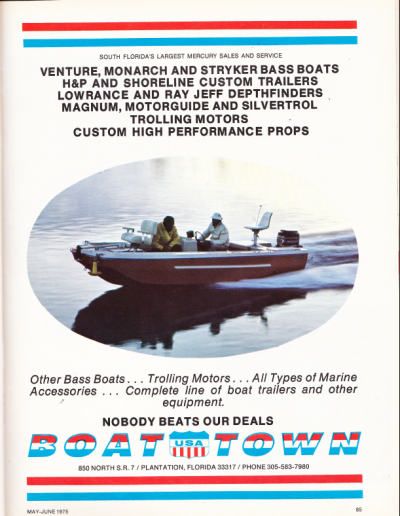 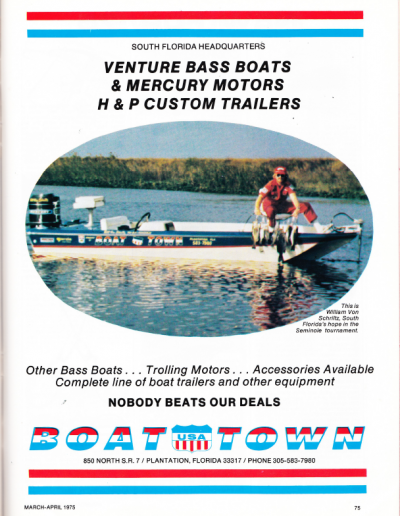 Clermont Marine, Jacksonville, FL – Clermont only placed one ad in American Bass Fisherman but I needed to include it because if its contents. For one, the ad features an angler with an amazing string of Florida bass that would open anyone’s eyes, even today. But even more eye-popping than the fish is the boat they’re advertising.

The 15-3 Stryker they’re advertising comes with a 150-h.p. Mercury motor! Wow! Imagine how fast that sucker went down the lake? I can’t imagine that was legal by even BIA standards at the time. Add to that a drive-on trailer, and a MAG-18 trolling motor for $3,995 and you have one screaming deal. Ditto’s Sales and Service, Palatka, FL – Here’s an old name in the annals of Bass Fishing, Bobby Ditto. Most people know of Bobby Ditto as the guy who developed Ditto Baits, namely the Gator Tail. Not many outside of Florida know he actually owned one of the biggest boat dealerships in the south. Ditto Sales and Service was a big deal. They sold Ranger, MonArk and Stryker according to these ads. 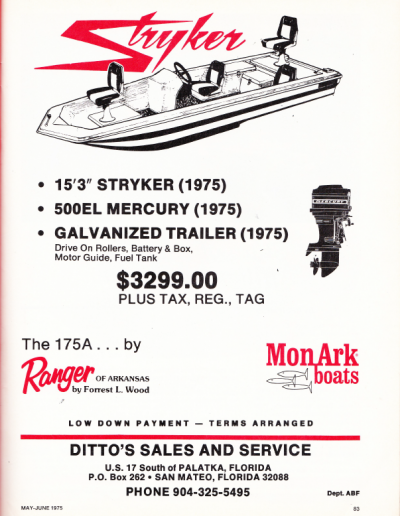 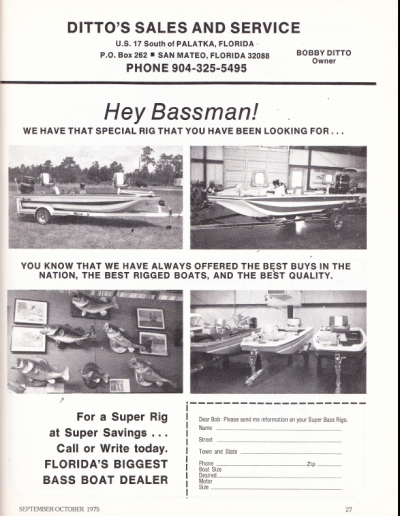 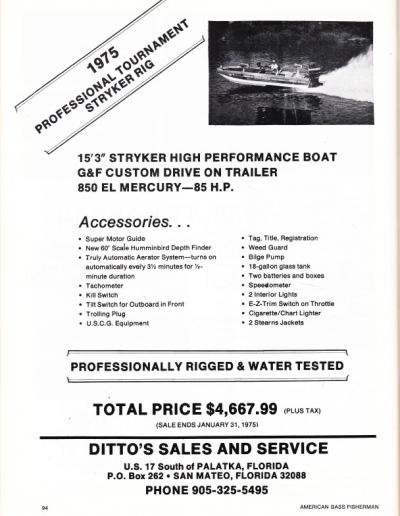 Economy Marine, Pensacola, FL – Another dealership I found was Economy Marine, again out of Florida. I included this ad because it finally shows a dealership and their prices on Ranger Boats. Economy is offering the Ranger TR-10 with an 85-h.p. motor fully rigged for $4,899 or you could get the new 175A with a 115-h.p. motor rigged for $5,369. The 175A offer does not make any mention of electronics so I assume you’d have to buy those for extra.

Economy was also offering two different Ouachita models for sale, the MB or K models. Each came with a galvanized trailer, 85-amp battery, 45-h.p. Volvo Penta motor, controls, tie-down strap, livewell and mechanical steering ONLY, for $2,495. It was a bare boned boat but for the money, you could probably outfit it the rest of the way for a little more. That brings us to the end of this series on Old Bass Boats – 1975. As you can see, there was a lot going on in 1975. We hope you enjoyed this look back and we look forward to bringing you the 1976 boats soon. To read Part 1 and Part 2 of this series, click the highlighted links. 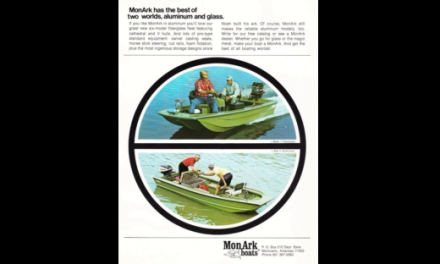 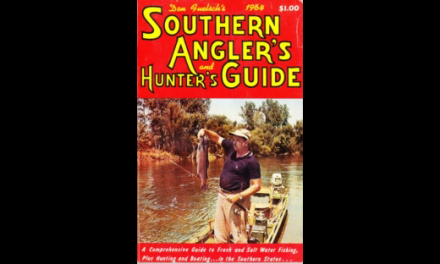 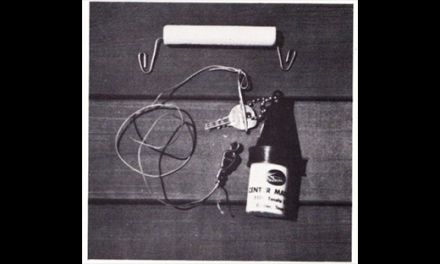 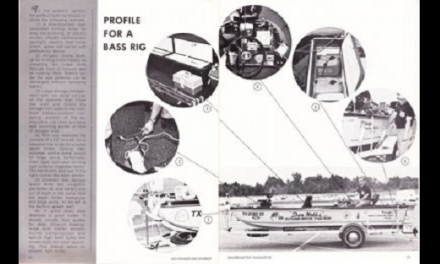