Again, technology has replaced that old bygone era of buying every bass fishing patch and having your wife sew them to every square inch of your fishing jumpsuit of vest. Today’s die-sublimated “jerseys” take all the fun and character out of pimping the tackle you wish you were paid to use. You surely didn’t get paid for it back then unless your named ended in Martin, Dance or Mann.

Besides manufacturers patches, there were others that the bass angler wanted or coveted. For example, all the bass fishing organizations had their shields and even bass clubs had their logos made into patches.

The first club I belonged to in southern California had its club patch and presented patches for 1st-, 2nd- and 3rd-place tournament finishes as well as for AOY. These patches went down the arm of your jacket, under the club shield, and looked pretty cool. You knew who the sticks were by just looking at their arm. It was fun and brought us all together in a patchy sort of way.

Back in the day where would a club get a load of patches to put on their jumpsuits or jackets? Well, EBSCO Lettering Service out of Birmingham, AL (home of all things bass patch) was where you went to. Our club used them, and they did a great job. I don’t know how many other clubs used them but based on the fact they advertised in every bass magazine out there (this advert was from an old Western Bass magazine) they must have been busy.

Back to die-sublimated jerseys. I wish these would have never come out, to be honest with you.  Back in the day, you didn’t have to change out your clothes every year and if you left a sponsor in the middle of the year, you didn’t have to order a new set of clothes to reflect that change. The jerseys are comfortable, but in my opinion, they lack the individual character each angler put into their vest or jumpsuit.

The other problem inherent with the jersey phenomena is companies and organizations are less apt to make patches. Bassmaster, for example, used to make patches for every event and each angler got a set of three.  Since jerseys came out, the patches have disappeared. That’s led to a collector’s market for old patches and what used to cost a buck or two has skyrocketed into the $20 range and even higher.

So, who was this EBSCO company?  If you’re familiar with PRADCO, the name should ring a bell.

EBSCO bought PRADCO from George Perrin in 1980 and kept the business in Fort Smith, AR. In 1983, they purchased Heddon. Since the Heddon purchase, EBSCO has bought Cotton Cordell, Lindy/Little Joe, Bomber, Norman Lures, Smithwick, Arbogast, Creek Chub and many more.

From the research I’ve done, EBSCO is a Birmingham, AL business started in the 1940s. Although they have the world’s largest tackle manufacturing company, their main business is in research, historical databases, journals, steel and real estate – an interesting mix.

I went to their site to see if they’re still in the business of making patches and it appears they’ve abandoned that market. Instead, their promotional group has moved on to electronic promotional products. Imagine that in this day and age.

So, if you’re a patch pirate, it looks like you’ll need to head over to the auction sites to fill up your fishing vest. No more buying from the Bass Pro Shops catalog or getting a patch from a tackle company when signing up as a field tester. Progress sucks in some ways. 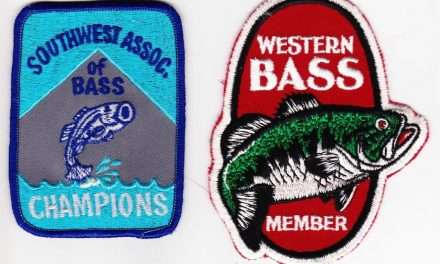 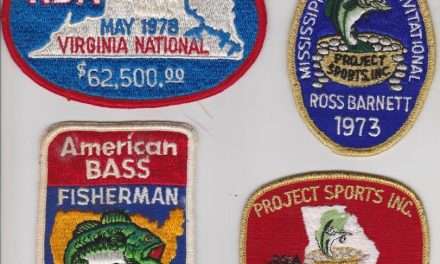