Here’s a boat catalog for those of you who were tin-boat aficionados back in the 1970s.  Back in the 1970s, there were three aluminum boat manufacturers who in my area of the world ruled the roost.  They were DuraCraft, Fisher Marine, and today’s subject, Lowe Line.  What we’re looking at here is a 1978 Lowe Line boat catalog complete with all their offerings.  For me it brings back memories of days fishing the famed San Diego Lakes as well as the lakes in the inland empire.

I’m sure it’s the same story everywhere that has small waters, or anglers who didn’t care about not having a shiny glass rig.  These boats did their job well, cost nothing to run, and got into tight places much better than their bigger, heavier cousins.

What made the small tin boats so popular in the San Diego region was horsepower restrictions.  It’s not to say glass boats weren’t allowed on these lakes at the time, because they were.  But, to be honest, a full-sized glass bass boat didn’t feel at home there.  Even though the glass boats weren’t much bigger than these 14- to 16-foot tin cousins, the motors on them generally were much bigger than a 25-horse and they didn’t like to be limited to the 10-mph speed limit imposed on the lakes.

Big two-stroke motors without oil injection did not like to be run at 1500 RPM and when they did for any length of time, the smoke generated by the motors would gag a maggot on a gut barge.  Not to mention foul plugs till the cows came home.

The San Diego Lakes were built for these aluminum boats and boy did you see it when you got to the lake early Saturday morning.

Although Fisher Marine probably had the market share back then, Lowe Line was a close second.  Built out of Lebanon, MO, these boats were well built and functioned perfectly in every way an angler would need.  They didn’t require a 24-volt trolling motor, operated on less than six gallons of gas a day, and they didn’t need the constant waxing and buffing to keep them showroom shiny.

Lowe Lines on most of the bigger 15- and 16-foot rigs, the livewells were big enough to hold two limits of fish all day while two 200-pound dudes fished in comfort.  Don’t get me wrong, these weren’t the boats to be taking to Lake Powell and fishing 40 miles up lake.  But, if you fished small bodies of water or stayed within a logical distance of the marina on a big lake, these boats were more than adequate.

Let’s take a look at what Lowe Line had to offer the bass angler in 1978. In the 15-foot category, Lowe Line had three models to choose from.  The Darter, Stinger and Stinger Pro.  The Darter is what I’d call the bare-bones model at 15-feet in length, a 55-inch beam, 16-inch transom height and rated for a 20-horse motor.

The boat came equipped with two swivel seats with under-seat storage and tiller steering.  With a bench seat in the middle that doubled as a livewell, the boat had a ton of room for a boat of this size.

Next in this lineup was the Stinger.  This model was nearly identical to the Darter but with the 57-1/2-inch beam, it was capable of handling a 25 -horse motor.  It came with console steering, a huge livewell, a semi-raised front casting deck and two deluxe seats with under-seat storage.  As an added benefit, it also had an aluminum pad to support a trolling motor at a better angle than the Darter.  With a 25-horse motor, two batteries, a six-gallon tank, and two healthy anglers, this boat would cruise at 25 mph all day long.

The top-of-the-line model in the 15-foot offerings was the Stinger Pro.  This boat not only had fore and aft elevated casting decks, had a bench seat for driver and navigator as well as a huge livewell.  This boat, because it had a 20-inch transom, could take on a 40-horse motor.  On a slick day, this boat would push 32-34 mph fully loaded and again use less than 6-gallons of gas in a full day.

In the 16-foot category was Lowe Line’s Hustler Series.  Starting off with the Hustler, this boat was nearly identical to the Stinger except a foot longer and made with 0.072 aluminum.  As with all the boats in this series, it had a 20-inch transom which allowed for a 60-horse motor, had a semi-raised front casting deck as well as console steering.

The Hustler also featured two swivel seats with under-seat storage, a large livewell and a trolling motor pad.  Rigged with a 40-horse, the boat would easily do 30-mph loaded and provided a stable platform to fish from.

The Hustler V-Bow differed from the standard Hustler as you would imagine.  Instead of the standard jon boat hull, the front of this hull was fashioned into a v-bottom that segued into a standard flat jon bottom.  The v-bow didn’t do too much for the ride but it did break the swell away from the boat and prevented a lot of spray from coming over the bow in rougher water. It too was rated for a 60-horse motor and had the same giant livewell the Hustler had.

At the top in this class was the Hustler Pro.  Built off the same hull as the V-Bow, this boat had fore and aft elevated casting decks, front and rear pedestal seats, bench seating and under-deck gas and battery storage. The Hustler Pro was rated for a 70-horse motor due to the bench seating for driver and navigator.  It was a beast of an aluminum bass boat for the day and fished well.

That’s all I have for the Lowe Line Bass boats of 1978.  I have a stack of these to share in the future and hope to get them scanned and loaded at some time soon.  If you had a Lowe Line back in the day, or if you have one now, please let us know what think or thought of it in the comment section below.

In the meantime, if you’d like to look at the whole 1978 catalog, check out the gallery below.  Just click on the first image and scroll through the gallery. 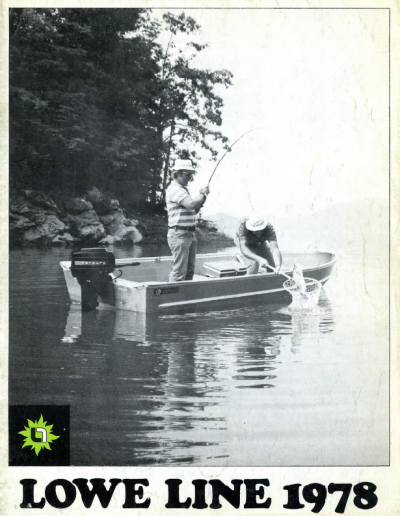 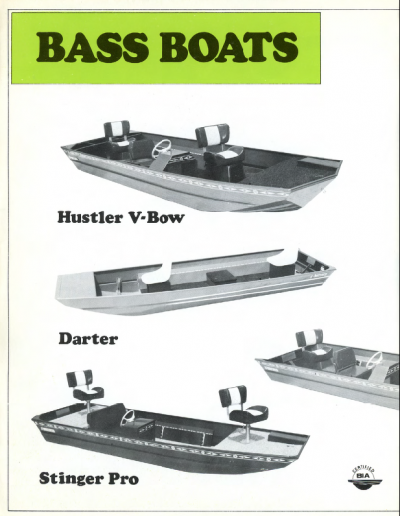 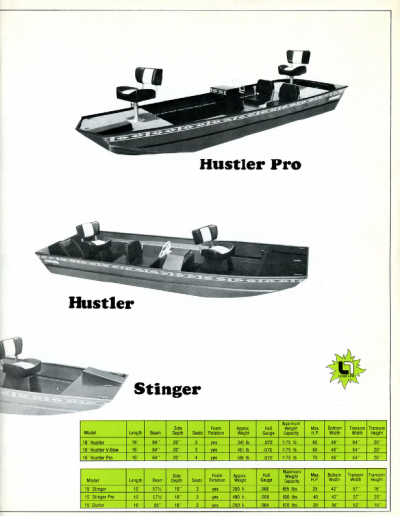 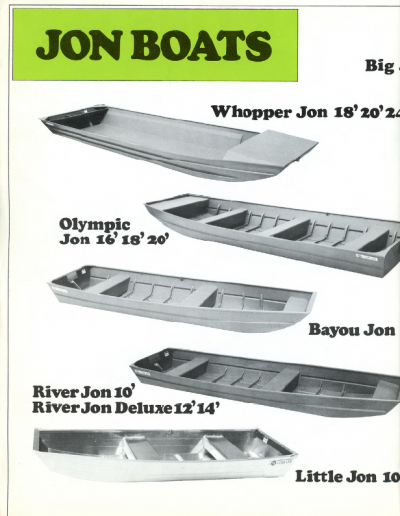 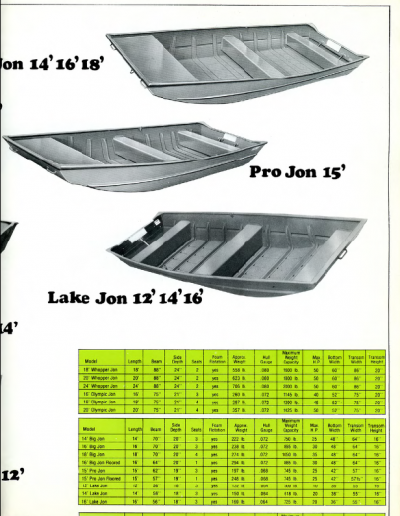 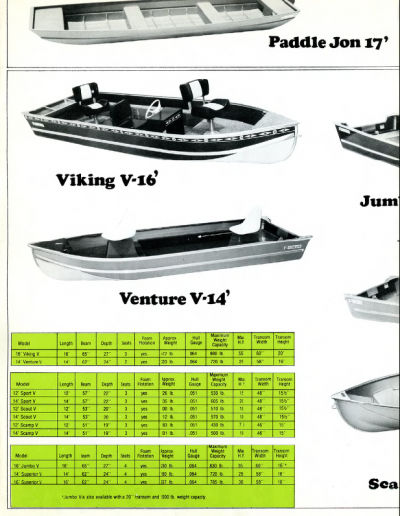 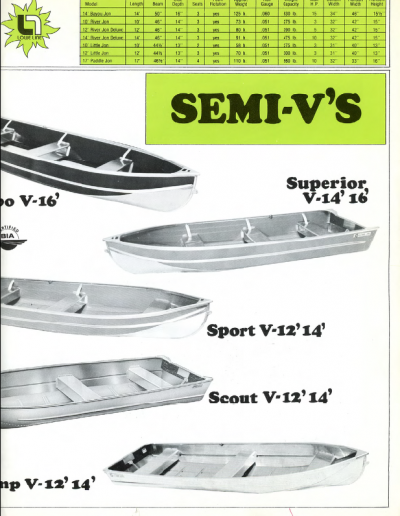 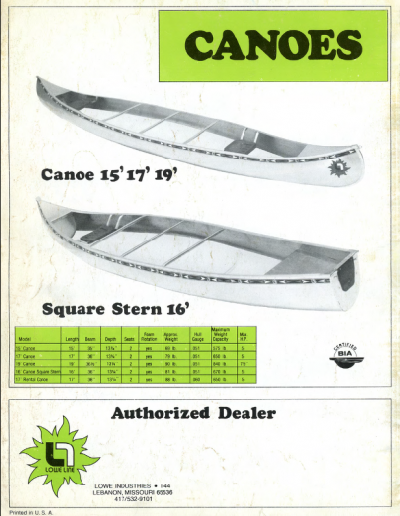 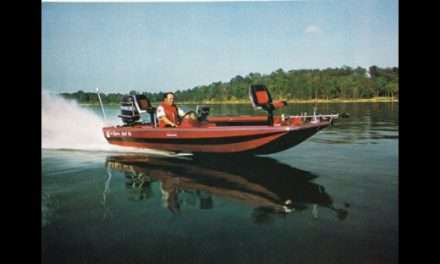 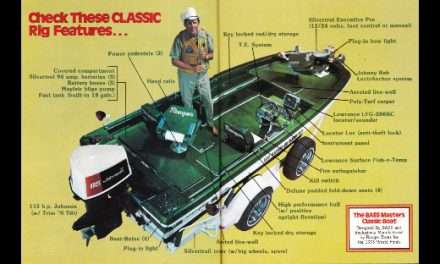 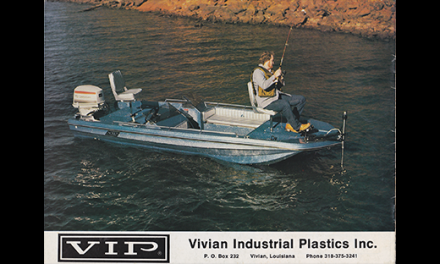 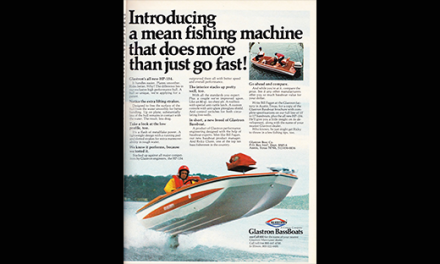